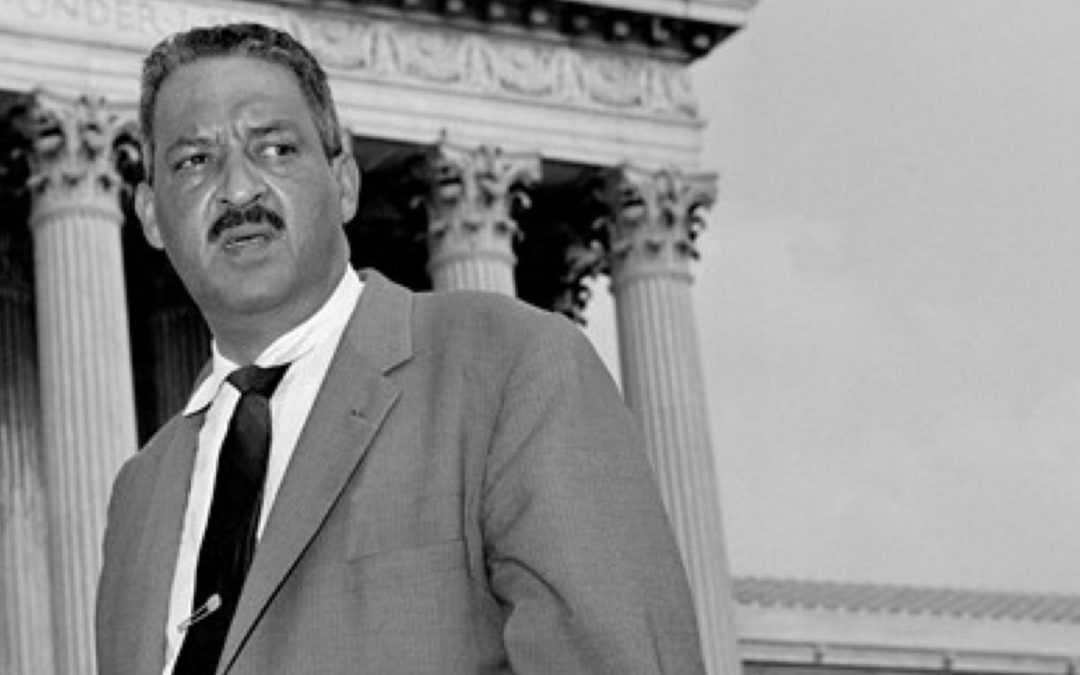 The measure of a country’s greatness is its ability to retain compassion in times of crisis.
-Thurgood Marshall

Thurgood Marshall was the country’s first African American Supreme Court judge. Before landing the historic position, he was known as a leader for equal rights, having argued, and won, hundreds of cases to bring the nation closer to equality. A man that led himself well and stood for a cause much larger than his own, Thurgood Marshall gave us several great examples of leadership.

Follow your calling instead of what others call you

Thurgood Marshall knew that he wanted to be a lawyer and worked hard through his college career to position himself for law school. After graduating with honors, he was rejected from the Maryland Law School based on his race. The encounter with discrimination stuck with him for the rest of his life. He went on to become a lawyer though another school, worked at the NAACP and began arguing civil rights cases.  Where Dr. Martin Luther King brought people together in the streets, Marshall began righting social injustice laws in the courts.

When you find your calling, let no one keep you from it. If you run into adversity, find a way around it, through it, under it. Do whatever needs to be done to follow your calling. Had Marshall given up, the civil rights movement may not have been as strong and the progress set back a number of years.

Use your gifts to help others

Marshall’s drive was to end as much inequality as he could. He won one of the most famous cases of the 20th century; Brown v. Board of Education of Topeka. He challenged the notion of separate but equal, and then won a unanimous decision that “separate educational facilities are inherently unequal.” While the change was slow, this was the foundation that ended segregation in schools.

Use your gifts, just as Marshall did, to help others. It may not be as dramatic, but there are certainly ways that you can utilize your skills and talents to increase the value of others.

At Marshall’s retirement press conference, several reports asked him about his legacy. One asked about MLK’s “Free at last” statement to which Marshall replied that he didn’t feel free. Marshall also said that wanted to be remembered as a man that did what he could with what he had. He knew that he wouldn’t see the vision that he and Dr. King had during their lifetimes, but that didn’t stop him from pushing towards the goal.

Hopefully, you are working towards a vision and purpose for your life and/or work that is so big that you may not make it. That’s what makes it exciting! Don’t be discouraged if at the end of the day you don’t get to realize the vision. Think about the progress that you made from your efforts.

I had a culture vision for an organization that had been around over 100 years. Although I never got to realize it’s full potential, I’m very proud of the progress that was made. Sometimes you are a steward of a vision for a while and then someone else will come along and carry it further.

Use your skills to help others, follow your calling and shoot for a goal so big that you may not hit it in your lifetime.